Warning: Your iPod is a tool of the patriarchy 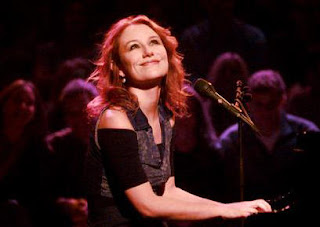 A big part of why this blog exists is the sheer number of people who've told me, "I just don't like female artists. I don't know why. It's not that I don't think women can be good songwriters or performers, it's just..." which makes this post all the more disappointing.
Granted, I don't think we should be checking our playlists, tallying up the number of women and if parity is not achieved, there goes your feminist cred. (Lord knows I swapped mine for some magic beans and glitter nail polish years ago.) But it's disheartening still.
Music, more than any other medium, is tethered to emotion. Those songs that smack of that moment in time, what you were doing, what you were feeling, when you first heard them are hard to let go, and you shouldn't have to let them go even if they don't jibe with who you are now. I'm the first to admit that I'll spend weeks listening to nothing but old Whiskeytown records, and that my most played artists are sad white boys with acoustic guitars. I'm fully ensconced in indie land with its black jeans and alternative haircuts and bands largely consisting of guys. Sexism and racism in indie and punk remains one of popular music's most overlooked concerns; look at any critics' list, and it's no secret whose music is considered "art." But it's 2012 and the days of one or two good radio stations are long gone. Anyone with an internet connection and some spare time can browse youtube or spotify for new artists. The excuse that "it's harder to find good female artists these days" simply doesn't work anymore.
One thing being a music blogger who tries sees things through a feminist lens has done is force me to look beyond the pop music spectrum and find interesting artists in genres that I wouldn't had I to rely on what radio is telling me is worthwhile. It might be a little harder to just be lazy and just let great music fall in my lap, but it's much more rewarding.
Posted by KP at 9:03 AM